Ideas, and Their Opposites

We all love to state the things that we stand for. We're not nearly as good at stating the things we stand against. But you cannot have one without the other. 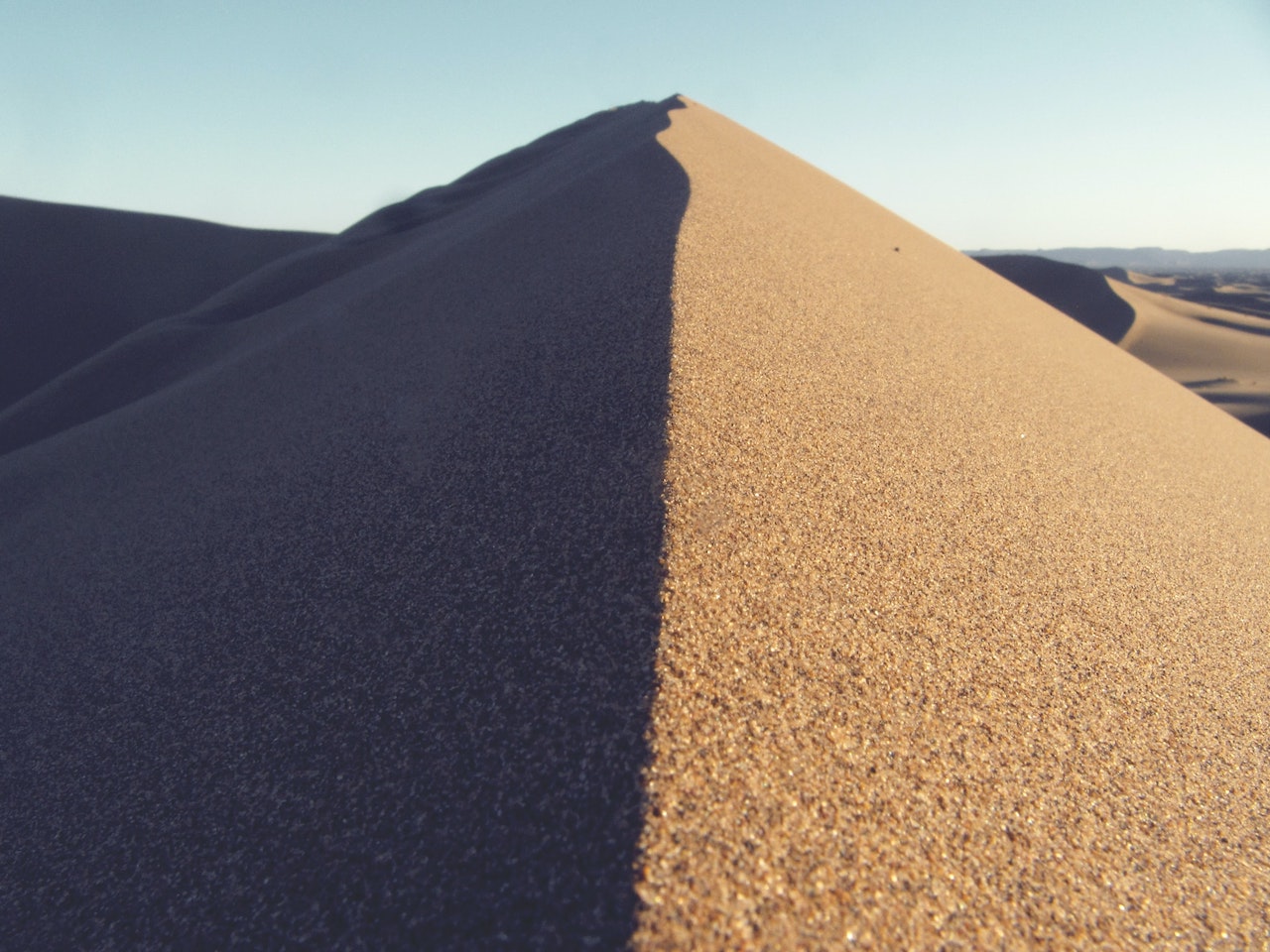 All existence is defined by and exists only in conjunction with its opposite. The original meaning of yin and yang is the bright (sunny) side and the dark (cloudy, shaded) side of a hill. (Photo by Fabio Rose on Unsplash)

“What do you stand for?”

This is one of the most important questions we can ask ourselves and those around us. It’s highly relevant to topics that are near and dear to me including business, blockchain, and governance. If a project or organization doesn’t clearly articulate its values and purpose, it’ll invariably lose its way when times get tough, which they invariably do. It’ll also struggle to engender followership in others.

This goes for leaders of projects and organizations, but it goes for us as individuals, too: without a sense of mission, purpose, and values, we tend to lose our way easily and we struggle to make an impact. Without a mission, as an individual or as an organization, it’s impossible to know how well we’re doing or to course correct. (And a generic mission such as “sell as much as possible” or “enjoy yourself as much as possible” is not much of a mission and won’t get you very far.)

But there’s another side to this question, one that’s equally relevant and important but often overlooked: “What don’t you stand for?” Because you cannot ask the first question without also asking, explicitly or implicitly, the second.

Ancient Chinese philosophers were on to something when they developed the notion of yin and yang. A dualistic cosmology makes a lot of sense, because pretty much all things are defined by and exist in conjunction with their opposites. There’s no light without darkness, no male without female, no hot without cold, and no right without wrong.

I first really began to understand this idea a few years ago when I learned about the “Big Five” personality traits: openness, conscientiousness, extraversion, agreeableness, and neuroticism. Naively, it may seem like there is a better and a worse side on each axis. For instance, it may seem better to be open, conscientious, extraverted, agreeable, and confident (i.e., not too neurotic).

However, upon deeper reflection, it becomes clear that each extreme has both positive and negative aspects. Those who are very open may have more and varied experiences, but they tend to be less focused, trustworthy, and reliable, and are more likely to engage in high-risk behaviors such as taking drugs. Those who are very conscientious are likely to be responsible and successful, but tend to lack spontaneity and adaptability, and may therefore miss out on opportunities and new experiences. Those who are very extraverted tend to have strong social networks, but they likely lack focus and attention to detail, and may struggle with deep work. Those who are highly agreeable are easy to get along with, but tend to be fickle and change their minds and behavior to suit those around them, without having strong principles of their own. And finally, those who are emotionally stable, a desirable quality, may be overconfident and may miss important details that are obvious to someone who is more neurotic.

The point, of course, is that there is no right or wrong, no better or worse on any of these axes. The right way to interpret our own personality traits is to find the ones that are the most pronounced, as these are the sources of both our greatest strengths and our greatest weaknesses. My most pronounced personality trait is probably my curiosity and openness to experience, which at times makes it very hard to focus on one task or project and see it through to completion over a period of months or years when many other interesting and exciting opportunities beckon.

In modern society, we love to tell people the things we stand for. Pretty much every company has a mission statement or a set of principles on their webpage and in their investor materials, and politicians make lots of noise about their platforms and the policies they support. What they talk about a lot less, however, is the things they don’t stand for. Life is all about tradeoffs: whether you want to admit it or not, the very act of deciding that you stand for one thing is by definition the act of closing another door and deciding that you’re opposed to something else.

I’ll use myself as an example. A few months ago, as an exercise, I made a list of my personal values: the things I stand for and believe in. At the top of this list were values such as Excellence, Humility, Empathy, Compassion, and Curiosity. It sounds like a pretty good list, but I recognize that each of these values limits me in some important way.

To me, Excellence means working hard and always doing work that I’m proud of. It means that I put my money where my mouth is, to so speak, and I prioritize actions over words. The downside of this value is the need to limit my own output: if I put a lot of effort into something that I’m not proud of, that work will probably never see the light of day. This has been a challenge with my writing. I’ve written dozens, perhaps hundreds, of pieces that I’ll probably never publish because I don’t feel that they’re up to scratch. I’m trying to address this with three promises I’ve made to myself: 1. that I’ll publish something every week, 2. that I only need to be 80% satisfied with the things I publish (since the last 20% would be impossible), 3. that I write, first and foremost, for myself, not for an audience.

To me, Humility means taming the ego. It means putting others before me, and always doing what’s right regardless of whether it benefits me personally or is good for my “personal brand.” It means acting out of reasons such as Compassion rather than out of pride. The downside of this value should be obvious: it means that I’m perhaps less ambitious than I might be if I were more prideful, and that I may benefit less in material terms from my work than I might otherwise. (To me, the emotional, intellectual, and spiritual benefits far outweigh the material benefits, and anyway, those who are the least prideful and the most generous do tend to do pretty well over the long run.)

To me, Empathy means reflecting on the effects that my words and actions have on the people around me, and whenever possible, putting myself in the position of others to understand how they see and experience the world. The downside of this value is similar to that of being highly open to experience: it means that I’m less focused on one particular perspective or set of beliefs, things that are helpful if one wishes to have a real impact.

Compassion is closely related to both Empathy and Humility: it also means to consider the impact that I have on all other people, and all other lives, now and into the future. To me, it means acting in a way that brings the greatest amount of happiness to and causes the least amount of suffering for others. The downside of this value is analysis paralysis: sometimes it’s not possible to know what the impacts of one’s actions will be, positive or negative. This is especially true of higher order effects, over time and at a distance. Sometimes actions that have a chance of leading to great benefit in the future can cause suffering in the short-term (a version of the trolley problem). A life lived in constant pursuit of Compassion is a life of frustrating, often quixotic analysis. (Here, as well, I tend to invoke the 80/20 rule as a way of avoiding this paralysis.)

To me, Curiosity means to question everything. It means asking lots of hard questions and always listening more than I speak. It means reflecting on my own ignorance and cultivating a sense of beginner’s mind. It means cultivating, and demonstrating, a genuine interest in the people, places, and things around me. It means maintaining a healthy respect for the things and ideas that I haven’t yet been exposed to. As with Openness and Empathy, the downside of this value is lack of focus on one particular perspective, set of beliefs, or course of action, since there may always be another possibility that I haven’t yet learned about.

By deciding to stand for these values, I am implicitly deciding to stand against things such as pride, ambition, material comfort, focus, extremism, and quick action. While I’m happy to take a stand against extremism, I don’t feel so strongly opposed to, say, focus, which is clearly a powerful tool when used for good. And, of course, values don’t exist in a vacuum: there are intricate, complex, and sometimes contradictory connections among them. For instance, I put humility before pride, but I also value excellence, and isn’t taking pride in one’s work part of celebrating excellence? Obviously, understanding my own value system is still a work in progress—and understanding and articulating it better is one of my goals for writing here. As Douglas Hofstadter put it, “We are all bundles of contradictions.”

What things do you stand for? What matters the most to you? What ideas, beliefs, or patterns of behavior are you the most strongly wedded to, and the least willing to give up? These are your values and your most strongly expressed personality traits.

Next, consider via process of elimination which doors these values and traits close for you. What things do you by necessity not stand for?

I propose that, when we ask ourselves and one another what things we stand for, we also always ask the second half of the question, no less important than the first half. We may be surprised by the answer.