We Live in Interesting Times

For better and for worse, life has become more eventful lately. May it stay that way.

What the world feels like in 2020: if the meme of the past few years has been the room is on fire, 2020 feels like the whole building is burning. (An image widely shared on social media of unrest in Minneapolis earlier this week. Source unknown.)

A few mornings ago, I had to call 911. I had just finished a run, and happened to witness a minor accident where a woman had fallen from a scooter (fortunately, she wasn’t badly injured). Everything happened more or less as it should: a small crowd of people gathered to check if she was okay and to see if there was anything they could do to help. I was one of the first to arrive, so I calmly called for an ambulance, which arrived in under five minutes. The paramedics helped her onto a stretcher. Someone else parked the scooter for her, and stowed the helmet. The traffic continued to flow slowly past. No one panicked. There was no shouting, no screaming. Within ten minutes, the whole incident was over, invisible to anyone passing.

Just a few hours earlier in a different part of town I had passed a large crowd protesting the deaths of George Floyd and other black victims of police brutality. The group looked peaceful to me, but groups like this across the city, and across the country, went on to set fire to garbage cans and police cars that night. The past week has seen more social unrest than any since 1968, when the assassination of Martin Luther King Jr. was followed by riots for weeks across more than 100 cities. 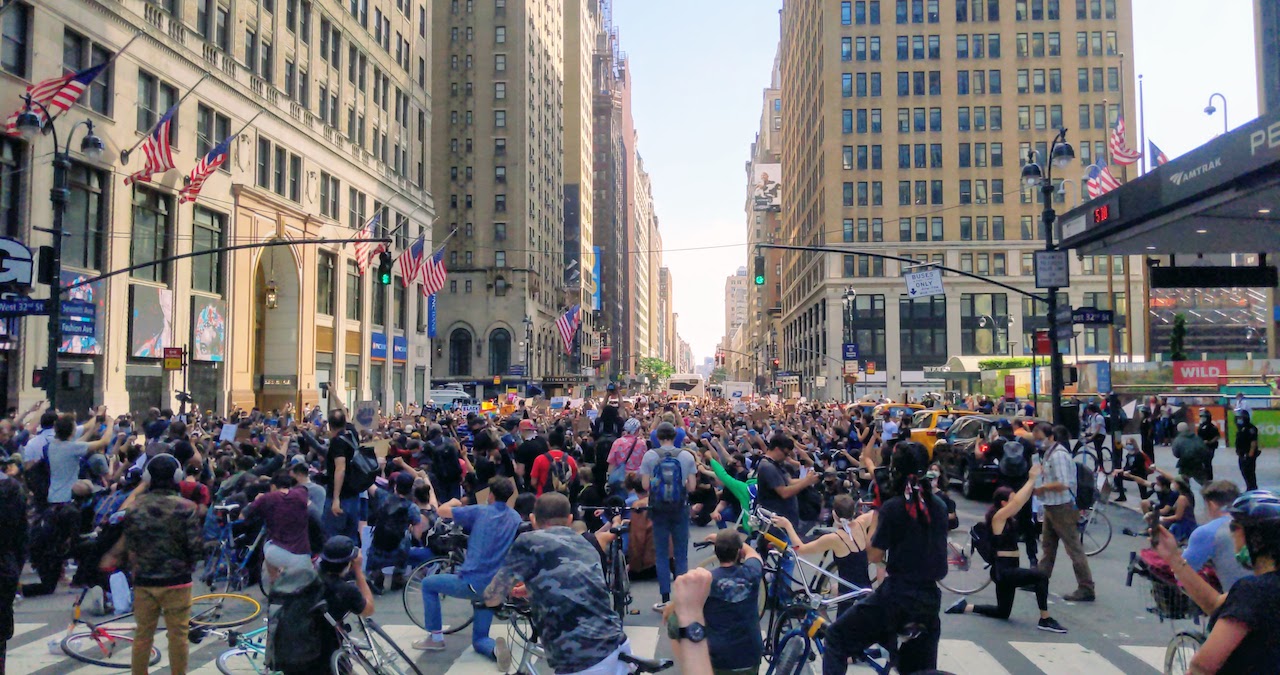 A crowd peacefully protests the deaths of George Floyd and other black victims of police brutality in front of Penn Station, the week of Floyd's death. Photo by the author.

Reflecting later, I noticed that I was feeling a lot of cognitive dissonance over the contrast between these two situations.

In the first, the accident, it’s remarkable how many things had just worked. There were other people on the scene. Despite not knowing the fallen woman, they immediately stopped what they were doing and took the time to help her. Someone spontaneously began directing traffic, and passing cars, trucks, and buses slowed and steered clear of the accident—no small feat in the middle of the day on a major avenue in Manhattan! When I called for an ambulance, the stack of technologies, social as well as technological, that allowed one to materialize in under five minutes is truly remarkable: from my mobile phone to the telephone network to the 911 dispatcher to the paramedic crew, and everything in between.

The thought of all of those technologies lighting up in just the right order, at just the right time—of all of the protocols and lines of code involved—gives me a sense of awe as a technologist. And the result? Human suffering averted, or at least severely reduced. A forceful, if tiny, example of the power technology has to improve our lives when it works as intended. For 99.99% of human history this was not possible—and it’s still not possible today for, probably, upwards of 90% of people in 90% of the places where people live.

All of this contrasted against the chaos of the protests, happening at the same time and just a few blocks away. Not to mention the Covid19 pandemic that’s wreaked havoc on the world, and on my city, these past few months. The overwhelming feeling of 2020 has been of the sky falling, the building on fire, of society rending apart.

And yet—and yet. Things are still, mostly, working as they’re supposed to. Grocery store shelves are still full of reasonably priced fresh food. Ambulances are still arriving. Airplanes are still taking off.[1] 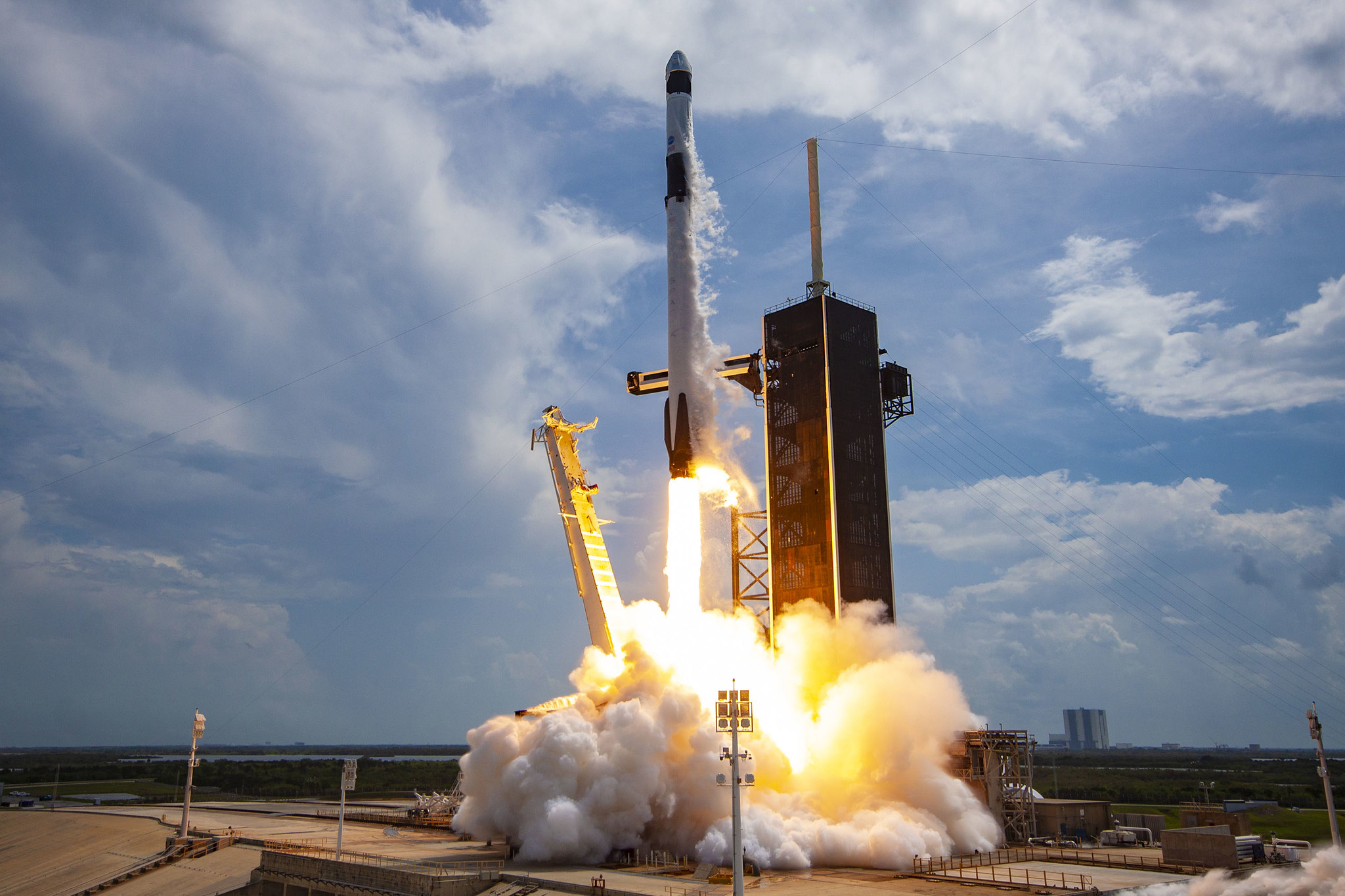 Crew Dragon, bound for the International Space Station, launches from the Kennedy Space Center on May 30, 2020. (Source)

I wonder if humanity has ever before seen such sharp contrast. On the one hand, a shining example of what’s possible when we overcome our differences, cooperate, and build fiendishly complex systems, technical as well as social, that just work. An example of everything that’s right with America, the economy, and modern society, and of our incredible potential. On the other hand, an example of how much is still broken, of how poorly these same systems and institutions serve so many people, and of how much work remains to be done. It’s no wonder that anyone living through 2020 is feeling whiplash, and cognitive dissonance.

In fact, both can be true at the same time. It’s possible to feel both that society is totally, scarily broken, and that things today are better than they’ve ever been before. It really makes you wonder, if we are capable of so much in spite of such broken systems, what might we be capable of with better systems?

I used to think, naively, that the story of human society was linear. I used to think of it as one long, inexorable march of progress: ever onward, ever upward, with a glorious future, an “end of history” moment just over the next hill. With the benefit of a few more years, and having read and thought more about it, I no longer feel this way. It’s now clear to me that human history is, rather, cyclical. There is no perfect system, and society looks less like an upward march and more like a pendulum, swinging back and forth between opposite extremes. We stumble, like a drunkard, from crisis to crisis. We’re stubborn, set in our backward ways, and it takes a crisis to get things unstuck from time to time.

This view of society is not, however, incompatible with optimism. History rhymes, and the cycle continues, but if you zoom out far enough you can discern an upward trend. To paraphrase Theodore Parker by way of Martin Luther King Jr., the arc of human society is long, but it bends towards progress. Or, as a friend put it to me recently, maybe less an arc and more like a staircase, spiraling slowly upwards. Sometimes the upward trend can feel painfully slow, almost imperceptible from where we stand. Sometimes things have to regress before they can resume bending upwards again, but the overall arc is one of progress.

At the same time, it’s important to remember that to be optimistic is not to be fatalistic. Progress is not automatic, and is in fact quite fragile. Society bends towards progress, and towards justice, because we do the bending.

The cycles have compressed recently, due to technology. It may feel like things are falling apart—like there are more oppressed people than ever, more social issues to fix than we can ever deal with. It may feel like things are breaking faster than we can put them back together. In fact, this is a positive sign, because it indicates that we are more connected than ever before, and that more people have a voice today than ever before. It’s a sign that more people are plugged in, better able to express themselves: more people are being seen and heard. That many previously unheard voices are expressing frustration and anguish should come as no surprise, but it’s not cause for despair.

While lurching from crisis to crisis, society needs to let off some steam—sometimes, a lot of steam. That’s positive too. Better gradual, halting progress than a century of absolute repression followed by an explosion—a revolution. What looks like chaos and disorder in the heat of the moment is in fact an important sign of progress. Some parts of the old order must be torn down in order that the new may rise. Indeed, this is the only way that progress ever happens. We have reinvented ourselves many times before, and we will do so again many times.

A lot of things are broken. May the ongoing social unrest be a constant reminder of that. May it make people in power uncomfortable. May it be a thorn in the side of those who benefit from the present system at the expense of others, and a spur to make painful but necessary changes. At the same time, may rocket ships continue to blast off, as a reminder of what we are capable of, and of what we are working towards.

Some might wish for total peace and quiet, for “law and order.” Not I. Society never, not even for a moment, stands still. And when society stumbles forward, it does so noisily and messily. May we continue to live in interesting times.