What the uniquely modern, American debates over wearing facemasks and confronting racism have in common 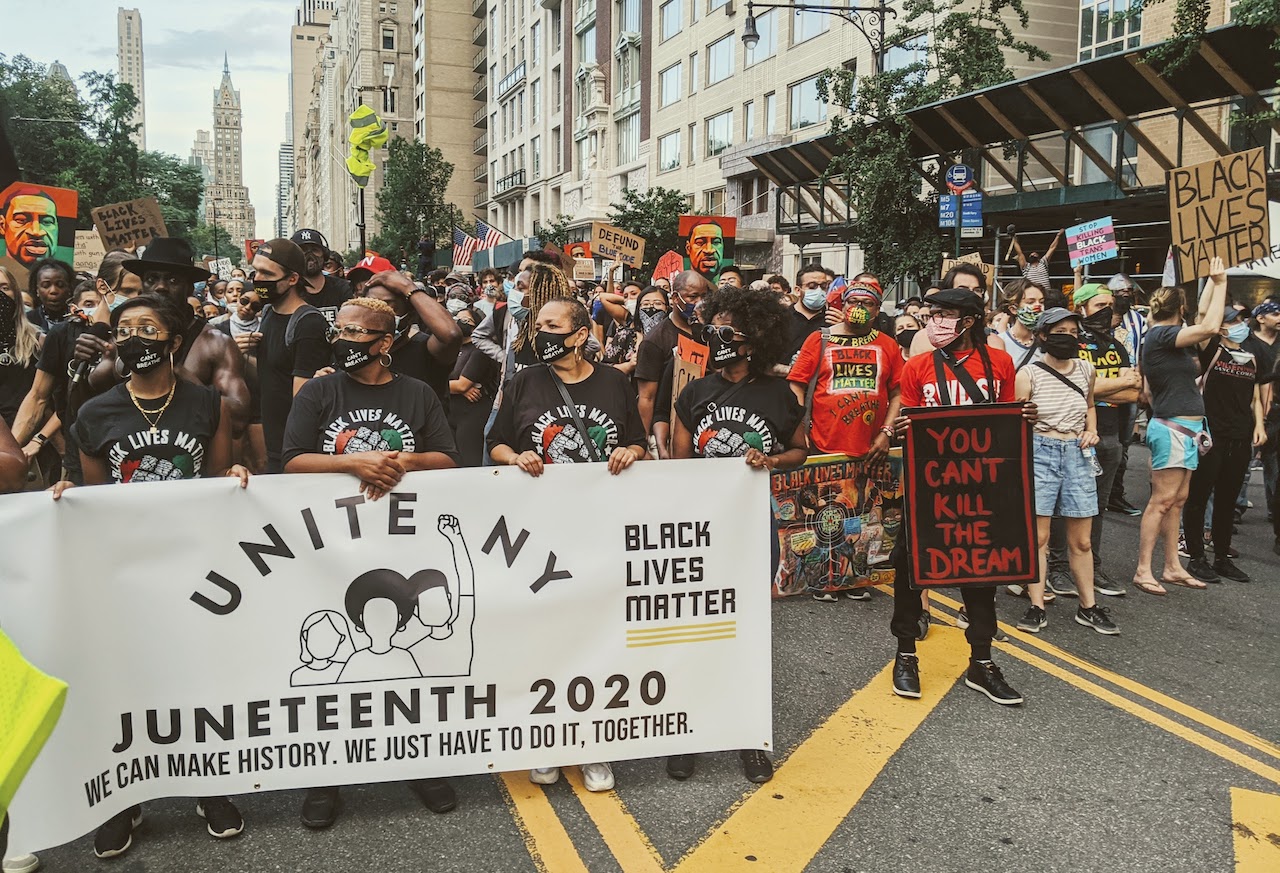 Wearing a facemask and fighting racial injustice may seem like they don't have much in common. Actually, they do. Black Lives Matter demonstrations in New York City, June 2020. Photo by the author.

I’ve recently been fascinated by two social, political topics that are highly relevant and controversial in America today. At first blush these topics don’t appear to have anything in common, but as I’ve thought more about society and about the connection between rights and duties, I’ve realized that in fact there is an important connection between them.

The first involves the requirement that’s been introduced in communities around the country to wear masks to protect oneself, and others, from the spread of Covid19. The second involves broader recognition of ongoing racism, and in particular of the fact that racism today is endemic, systemic, structural, and institutional, and that we all have a role to play in eradicating it.

What these seemingly unrelated topics have in common is that both require positive action on the part of the majority. Once enough people follow guidelines, wearing masks and practicing social distancing, the overall case load will fall. We know this because we’ve seen it work in New York, and in many other places besides. Defeating systemic racism, like defeating Covid19, will also require achieving herd immunity. We don’t stand a chance of overcoming racism until a sufficient fraction of Americans, especially White Americans, can overcome their aversion to talking about race and recognize the systemic, pernicious, ongoing role racism plays in society, and the fact that we all bear some responsibility to address it.

Both of these issues create a moral obligation (if not a legal obligation) of a positive duty towards others. While I’m no scholar of law, ethics, or theory of rights, my gut tells me that we’re struggling so much with both because of the positive nature of these duties—in other words, because of the fact that they require action rather than inaction.[1]

We’re used to being told that we cannot do something. Think for a moment and you’ll have no trouble coming up with many examples. Start with the Ten Commandments: don’t steal, don’t lie, don’t kill, etc. When we drive a car on a public road, we’re told not to drive too fast. Even core, constitutional freedoms have reasonable limits. While Americans have the right to bear arms, we’re not allowed to carry guns or other dangerous weapons in public in certain cities, and in places like schools, post offices, and courthouses. We have the right to free speech, but we do not have the right to slander others, nor to hate speech, nor to incite violence or shout “fire!” in a crowded theater. These are all examples of negative duties.

However, try to think of examples of positive duties—things that you’re required to do. It’s a much shorter list. As far as legal obligations go, we have to educate our children. If we want to send our children to school, we have to vaccinate them. We have to pay taxes. I struggled to come up with more examples than these! Most positive duties I can think of are conditional: if you drive a car, then you must wear a seatbelt. If you operate a restaurant, then you must undergo health and safety inspection. If you want to buy a gun, then you must get a background check. If you fly, then you must pass through airport security. And most are passive: submitting to something, rather than needing to actively initiate. Relatively universal requirements—i.e., things we must do whenever we are beyond the privacy of our own homes, in public—are quite rare! We generally have to wear clothes in public, but even this varies from place to place. In most places, we’re not even legally required to assist other people who are at peril.

Of course, there are many things that we’re not strictly required to do, but that we probably should do anyway: in other words, moral rather than legal obligations. We should all be kind to one another. We should all perform volunteer work, and donate to charities and causes that we believe in. We should all vote. We should help other people where and when we can, especially if it doesn’t cost us much or put us at risk. But we’re not compelled, nor required, to do any of these things, and by and large we’re not punished when we don’t.[2]

All of this makes sense when you think about it. Liberty is not just a buzzword that Americans like to wear on T-shirts. It really is one of the core, founding principles of this country. At the time of the founding, ideas that we take for granted today like democracy and equality before the law were novel, radical, and mostly untested. Many people really did fight wars and give their lives so that others—we—might be free. The peace and prosperity that Americans of my generation have on the whole enjoyed was paid for by an enormous amount of blood and treasure. As bad as things today may sometimes feel, it’s good to be reminded of this, and of how much worse things used to be, lest we take our present freedoms for granted.

While humanity today is freer than it’s ever been before, the reality is that most people still live in countries that are not, or are only partially free. One need look no further than Hong Kong or Xinjiang today to see the terrifying and very real consequences of the lack of freedom and democracy, and of how freedom is in fact in decline around the world. It’s no wonder that Americans tend to take freedom pretty seriously. I’m proud of this value, and I don’t blame anyone, American or otherwise, for standing for freedom.[3]

Yes, we Americans enjoy a certain set of rights: the right to life, liberty, and the pursuit of happiness. The right to religious freedom, and freedom of speech. The right to possess and defend private property. The right to life and limb, and freedom from persecution, unlawful injury, assault, or transgression against ourselves, our homes, our property, and our families.[4] But we also all have duties and obligations towards society, our country, and one another. One person’s right to freedom from harm translates directly into a negative duty on the part of everyone else not to harm that person unjustly. Our rights to habeas corpus and trial by jury translate directly into an obligation on all citizens to participate in jury duty. The one simply cannot exist without the other. We tend to focus on rights at the exclusion of duties—but they are intrinsically bound.

I think that all of us have the right to be out and about in public without facing a higher risk of infection from others acting selfishly or inconsiderately. For the same reason that we don’t allow firearms in public in many places, and for the same reason that we require ramps, elevators, and other facilities to guarantee access to those with disabilities, respecting this right creates a straightforward duty on us to wear face masks when we’re out in public. This is a no-brainer as the science is clear on the benefits (although the message from the federal government hasn’t been consistent, which has made matters worse). What’s more, masks are cheap, and are being given out for free in many places, so we really have no excuse for not wearing one. The fact that, in spite of this, many Americans refuse to wear a mask speaks to an enormous political and cultural divide, misinformation and ignorance, and a lack of compassion and common sense.[5]

Addressing racism is, of course, far more complicated and nuanced than the question of wearing a face mask. However, it’s similar in the sense that the right to life, liberty, and freedom from bodily harm on the part of hundreds of millions of nonwhite citizens—a right enjoyed equally by all citizens, in theory if not always in practice—translates directly into a duty on the part of every American.

The specifics of this duty are debatable, and it’s something I’ve been thinking about a lot lately. In addition to avoiding overtly racist acts, we definitely have a duty to listen, reflect, and educate ourselves about the history of racism and about racism more generally. We definitely have a duty to be honest with ourselves, and with those around us, about the realities of race, and about our complicity in a racist system. This can be difficult and it can be uncomfortable, so we have a duty to be a little uncomfortable. Even this is not enough, but it’s a good start, and if we’re more open and honest with ourselves and with each other, that might enable us to take larger and more difficult steps forward in addressing racial injustice.

Must we go further, and be actively antiracist? The duty is moral, not legal, so the answer will vary from person to person and community to community.

One of my favorite sayings is, “Freedom isn’t free.” No one’s rights were ever won, nor protected, through inaction, and now is no different. No man, woman, or child is an island, and each of our rights depend directly, and crucially, on the action and inaction of all of the people around us.

The fact that we Americans have collectively won the rights to do the things we hold so dear—to vote, to gather and protest, to have summer backyard BBQs, not to mention the right to generally act like the obnoxious, spoiled, entitled, self-centered, DGAF, “you do you” Millennials that we are—speaks directly and powerfully to the difficult, dangerous, and often unappreciated work that generations of our forebears did to earn us those rights and freedoms. The least we can do is recognize our privilege, show our gratitude, and, most importantly, take action to ensure that the same rights are extended to present and future generations of Americans, wherever they may have been born and whatever their skin color may be.

Liberty is one of the founding principles of this country, but so is equality. My right to act the way I want is no more or less important than someone else’s rights to security, health, happiness, and opportunity. We are all in this together.

We still collectively have a lot of work to do. It starts with being considerate of the people around us, showing some compassion and humility, overcoming our natural inclination towards arrogance—and wearing a mask.